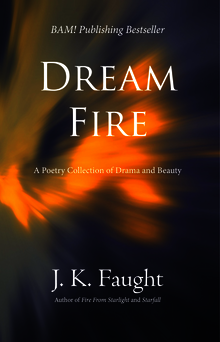 J. K. Faught has once more reached up to the heavens to bring star shine and sparks of fire to Earth. Inspiration and imagination in the poetic process have engendered creative fire. Intense concentration often transported the author into realms beyond the oceans and to stratospheric heights as though he were in a dream. This is embodied in the book’s title, Dream Fire. Imagination also has been paramount. Albert Einstein said, “Imagination is more important than knowledge.” In addition, a perfect, beautiful, dramatic fire could be referred to as a dream fire. Included are original poems of exhilarating light as in the category, “Heaven”, or some of the darkest and bizarre in the category, “Beyond Belief”, which are at extremes. Most, though, are in between, just as Life tends to be. Certain poems herein contain a musicality; not surprising, for as Edgar Allan Poe believed, “Poetry is akin to music”. The triumph of this book would be to entertain and inspire.