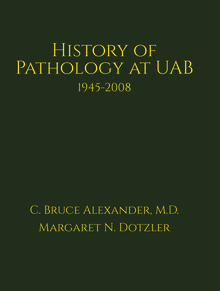 This book chronicles the formation and growth of the Department of Pathology at the University of Alabama at Birmingham between 1945 and 2008, and its rise to a critical component of a world-class academic Health System. The Department of Pathology was one of the first departments to coalesce within the newly established medical school at the University of Alabama at Birmingham in 1945. Its new chairman, Dr. Roger D. Baker, was the first full-time faculty member appointed and the first chairman of a department in the new school. Pathology is broadly defined as the study of disease, and a strong Pathology department was, and continues to be, essential to an academic medical center for teaching, research, and service.