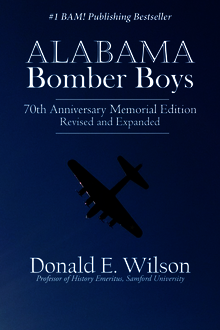 This Anniversary Memorial Edition of Alabama Bomber Boys marks the 70th anniversary of V-E Day on May 8, 1945 when the Nazis surrendered to the Allied Forces, helping end WWII in Europe. This revised and expanded edition contains more photos and a new epilogue written as a special tribute to all veterans of the Mighty Eighth Air Force with emphasis on those who are no longer with us.

Memories of the horrors of war are often sealed forever in the minds of the participants. The Alabama Bomber Boys is the story of some sixty World War II veterans who, after six decades, opened their minds to tell today’s generation, especially our youth, of their horrendous experiences in four engine bombers in frigid skies over Hitler’s Europe. Through previously unpublished oral and written accounts they discuss the pre-war Alabama culture from which they came, the culture in Britain where they lived and from which they flew, and the transition of the Eighth Air Force from an impotent bomber force in 1943 to the most powerful air force in the world in 1945.

When the airmen returned to Alabama, they were no longer the eighteen or nineteen year old boys that went off to war in 1941; in twenty-five missions over Germany, with their lives in the balance, they lost their youth. They had become “men,” who had witnessed falling aircraft, dangling parachutes, air to air collisions, bombers exploding in air, and countless other miraculous near death incidents. Five had endured the agony of German prison camps. One had received the Medal of Honor. Several had nearly lost their lives bailing out of their burning bombers. The memories they relate, some good and many bad, will haunt them for the rest of their lives. Thankfully, some of those memories have been unlocked and make the story of The Alabama Bomber Boys possible.