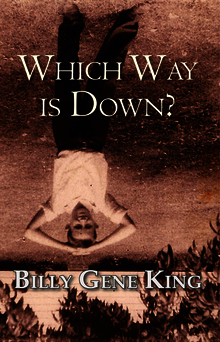 Which Way is Down?

How many lives can one person live in a single lifetime? First Life - Born in a cotton mill village boarding house in Huntsville, Alabama and raised by a black female bootlegger. Second Life - At age sixteen, King was selected to go to France on a student exchange program. After a tragic love affair, he came home and joined the Air Force at age seventeen! Third Life - After four honorable years in the Air Force, he worked his way through college laying sewer lines on the campus. After graduating he directed the Downtown Development in Huntsville and was named “Outstanding Young Man of Alabama.” Fourth Life - Elected as an Alabama State Representative and Senator during the George Wallace Administration, he was a natural risk-taker, not only in politics and business, but in his personal life; he raced motorcycles, Sky-dived, scuba dived, and bungee jumped! Fifth Life - Headed the Jimmy Carter campaign for President in Alabama. Selected for the Carter Administration’s Commission of Intergovernmental Relations. Sixth Life - Started a career in the development business where he developed fifteen hotels and motels and ten apartment complexes! Seventh Life - Purchased and renovated the Parliament House in Birmingham, an old downtown Birmingham hotel. Eighth Life - King realized that he was much happier as a poor kid being raised by a female bootlegger. "