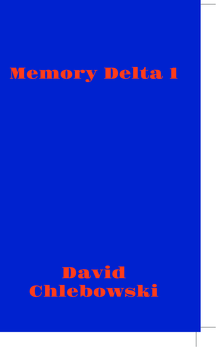 This is David Chlebowski's attempt to improve himself as he creates a unique project for his friends and his life. He looks forward to make plans to create a unique project in which he will try to please people and to improve his social standing in life. As he makes his project, he tries to discuss on ways to upgrade his computer. And the project is called Memory Delta. It is one of David's personal project in which he tries to preserve his history and his life. He has done some considerations of making the project for himself initially, so he has carried out plans to get some USB flash drives and to add a few hard drives. But he gets stymied by certain circumstances from his past while making his major project at his research lab. And the story unfolds on how he continues to make new friendships with people at familiar places while he writes how he feels about himself although he continues to struggle sometimes. He tries to make friends but ends up living a lonely time while he works on Memory Delta. His only hope in order to fulfill his dream is to get himself a prospective girlfriend who understands his project and his life.