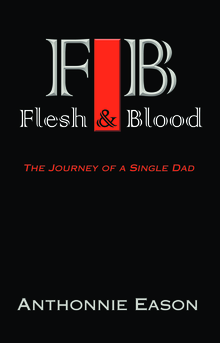 Flesh and Blood: The Journey of a Single Dad

Anthonnie is a 40-year old, single dad of two children and a Lieutenant Colonel in the United States Army. Having grown up in Kansas City, Missouri, with both parents in the home, he observed first-hand how to be a dad, work hard, love your family, and the principle that things are earned, not given. That work ethic carried over into his academic studies as he earned a Bachelor of Science degree in Criminal Justice (Lincoln University - Missouri), a Masters degree in Business Administration (University of Phoenix) and a Masters degree in the Science of Strategic Intelligence (National Intelligence University – Defense Intelligence Agency). While serving our nation with distinction for over 18 years as an Army Officer, he took on single parent responsibilities four years ago, raising his 12-year old son while maintaining an active long-distance relationship with his eight year old daughter.
Through this journey of raising his son, Anthonnie encountered other men who obtained custody of their children, those who were fighting for custody, and those who lost hope of even spending quality time with their child due to a strained co-parenting relationship. He learned many things through these relationships, but nothing was more pressing than the counseling tools that are critical for children. He also learned that being an active parent with a child in a different state is challenging, but love and persistence make the difference. Having written multiple theses and led varying groups through decision making processes, Anthonnie journeyed into the world of published authors with the intent of telling his story, finding ways to equip and encourage other single dads to fight to be in their children’s lives, and encourage single mothers to foster a respectable co-parenting relationship for the betterment of the children.